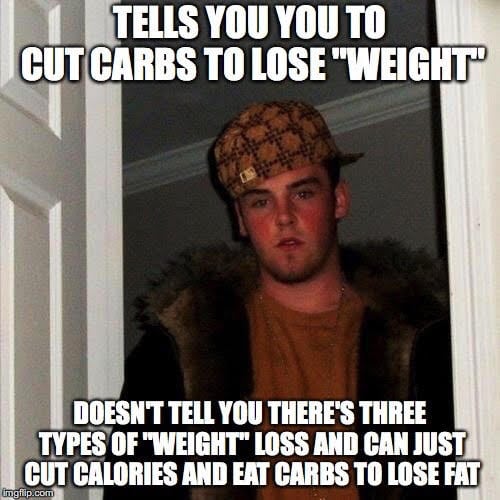 The human body holds a few grams of water for every gram of carbs consumed.

Which is why when you start a new fad diet which drastically cuts carbs, you shed water weight like crazy, think it’s fat and then go tell everyone how many pounds you just lost!

Pounds of what though? In order to lose 7 pounds of FAT in a week, you’d have to maintain a 24,500 cal deficit. For most people that would mean consuming NO food or drink for an entire week AND working out vigorously every day. If that example seems impossible is because it basically is.

In order to lose one pound of body fat, you have to maintain a 3,500 calorie deficit. After maintaining a caloric deficit for a few days, your body will START to lose fat but you absolutely won’t lose a pound of fat overnight.

“But Blake, I cut carbs and lost 40, 50, 60 lbs! You’re telling me that’s all water?” No. I’m telling you that you cut CALORIES by cutting carbs out of your diet (whether you realize it or not).

I’m also telling you that you didn’t have to cut carbs to lose the FAT portion of the weight you lost.

I’m also telling you if you’re still doing the low or no carb thing, as soon as you carb up again, you’ll gain back all the WATER weight you lost, seemingly overnight. Cutting carbs is a quick water trick fix if you want to fit into that dress this weekend Miss fancy or Mr. so-called tough guy. And you can preach about insulin or ketosis all you want but calories will always control bodyweight.

Now if you’re ready to eat fewer, yet much LARGER and delicious meals, no longer get hungry and maximize fat loss while minimizing muscle and bone loss, click here. FYI, if you want to do The Blake Diet and Keto, that’s cool, however, I’ve noticed most people quit Keto after taking my course.